On Sunday February 23rd Israel’s occupation forces’ treatment of the body of a Palestinian killed by it, and those who tried to recover the remains, in besieged Gaza 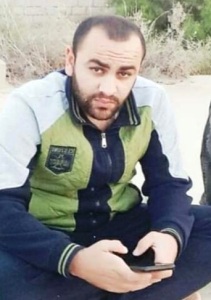 brought clearly out the brutality and sadism of the Israeli regime.

At this point there are several contradictory claims being made, with the timeline of events itself very different in them. In one version, there are hours separating the killing and the incident that followed when an attempt to recover a body was made.

According to the first version, the Israeli occupation killed at least one person on the border between besieged Gaza Strip and the ethnically cleansed Palestine 1948 during the night between Saturday February 22nd and Sunday February 23rd in what is in some reports described as ‘an artillery attack’.  Israeli occupation is claimed to have used flares, which indicates that it would have been before dawn.

Israeli occupation claimed that a group of people near the town of Abasan, east of Khan Younis, in the southern part of the tiny coastal enclave would have been trying to put a bomb on the side of ethnically cleansed Palestine 1948. The body of the victim seems to have been on the side of Gaza Strip based on the video of the Israeli attack on the people trying to recover it.

In the second version two people, in civilian attire, would have been shot by the Israeli occupation when they approached a fence on the border in broad daylight, in the Sunday morning. Israeli occupation claim in this version is that they would have had been carrying a bomb, which would have exploded when hit, killing one of them.

In the first version, what follows took place hours after the killing. In the second version it took place immediately after and both the civilians trying to recover the body and the Israeli occupation couldn’t have been certain that the man laying on the ground was dead. According to one claim, the whole incident would have lasted 40 minutes.

As the first version is more common in early and second in later reports, we consider the latter more likely as it could reflect increase in the amount of available information.

Israeli occupation forces attacked a group of civilians trying to recover the remains, at first shooting and wounding at least two and up to four of them, and then using a bulldozer, supported by a tank, which drove towards them and grabbed the body of by then deceased Mohammed Ali Hasan al-Na’em(27) in its scoop.

Although it is impossible to be absolutely certain from the video, it seems that the row of ‘teeth’ at the top of the scoop could have impaled the body – after the scoop was first brought crushingly down on the body. Clothes becoming entangled in the teeth, the

driver brought up the scoop.

This left the body hanging down from the top of the scoop from its clothes, swinging in air in a display of the brutality of Israeli occupation – and its total lack of respect towards the remains of its victims.´

If al-Na’em was killed during a night, then that implies that the Israeli occupation forces left the body just laying on the ground until Palestinians tried to recover it. This could be seen as luring people to act and then attacking them in a show of strength – and brutal lack of decency; but the same can be said if he was just hit by an explosion moments ago, with the driver of the military bulldozer incapable of knowing whether he was alive or not.

One report claims that a second person, seriously wounded, would have been evacuated successfully.

Mohammed Al-Na’em was a member of the Al-Quds Brigades, the armed wing of the Islamic Jihad, as acknowledged by the organization. He left several small children, the eldest son Hamza being seen here with his paternal grandmother after the family had received the news of his death.

Although a second death has been claimed in several reports, none has been confirmed nor any possible victim named in sources available to us, and the possibility looks now unlikely that there would have been a second fatality – assuming that the most seriously wounded person survives.

Israeli Forces Kill Palestinian, Drag His Body with a Bulldozer in Gaza (VIDEO)

One Palestinian atrociously killed, four injured by IOF in Gaza